I’ve been thinking about this post for months now, and the time has come to write it and I don’t have the words.

10 years ago today, a frightened 29 year old girl who was six months pregnant lay in a hospital bed, a place she had spent the previous 45 days with her head lowered below her feet, gripping her daddy’s hand with every hard contraction saying “Do you think he’ll make it to the hospital in time?”

She was worried that her husband wouldn’t be there when the babies were born.

Afraid he wouldn’t be there if the babies died.

I was that girl.

I believe the doctor’s exact words were “If I thought you had a ten percent chance of carrying the children to viability, I wouldn’t be asking you to terminate.  You have a one percent chance.”

We decided to terminate.

Then changed our minds the day we were going to give the go-ahead.

Friends, it was rough.

But we were steadfast in our faith that He who began the good work in us would be faithful to complete it.

He made them.  They were His babies.  He had given them to us.  We would let only Him take them away.

I’d like to say the next few weeks were a complete joy and delight, but I hate shots, and I had over 70 of them, so, no, not a great time for the old CPQ.

But we did have wonderful friends that stood by us and visited frequently, and family that kept vigil in the hospital night after night, and little by little, 12 hour shift by 12 hour shift, we started ticking off the weeks.

And with every week, we celebrated.

Yes, he brought me roses every single week.  Can I tell you how bad I feel about harshing on him about the ham yesterday?

We enlisted friends to pray for us (Here’s a picture of the emailed prayers that were sent in.  Craig would print them off and we wallpapered my room with them.  The nurses would later tell me they fought over who got to have me every day because my room was so peaceful.)

And we prayed ourselves.  It was a sweet time of deepening my trust in the God I serve.  And in the darkest hours (and there were some UGLY moments that are just unbloggable), He met me where I was.  And lifted my head.  And encouraged me and strengthened me.

Trust me for this day.

I had no one else who could save me.

Finally the day came when my liver and kidneys started to fail and no amount of medicine could keep my contractions at bay.  Craig raced to the hospital from the golf course an hour away. (Don’t be mad at him for playing golf while I was in the hospital.  Things turned in a matter of minutes and neither of us had any way to know it was going to happen).

As we were in the operating room prepping for surgery, the mood was tense.  I asked my doctor if I could see the babies as she lifted them out.  She very tersely responded “No, there won’t be time.”

At 6:25 on 6/25, JJ, our sweet Baby A made his appearance weighing 2 pounds, 4 ounces.  He was 13 inches long.  I could hear the quiet voices of his team as they worked on him and whisked him out to the NICU and made room for the next team. 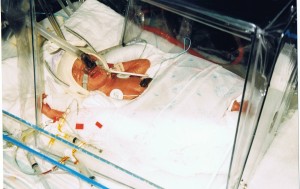 By the grace of God, he was breathing on his own without the need for a respirator.

At 6:27, Travis, Baby B was born weighing 2 pounds, 3 ounces, and 14 inches long.  His Apgar was 4.  He immediately went into distress and had to be resuscitated.

10 years later, I cannot look at this picture without crying.  You can count his ribs.  It breaks my heart, still.

At 6:28, Tommy, Baby C arrived.  At 14 inches long and 2 pounds, 3 ounces, he was mad as a hornet and crying for all he was worth.  It was the most beautiful sound I’ve ever heard.  He was the only one stable enough for me to touch.  I nuzzled his head for an instant before they whisked him away.

I am forever grateful for that moment.

There’s so much more that needs to be said, but my heart is too full as I reflect back on that day.

I am beyond thankful.

Tears spill down my cheeks as I type this.

God is so good. 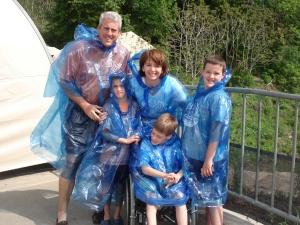 Have a nice day.

This entry was posted in Uncategorized. Bookmark the permalink.

45 responses to “We are family”