One of the benefits of driving all over the country was that it allowed me to meet up with friends that I hadn’t seen since eighteen jillion years ago in college.  The first of those meet-ups occurred at The Big Texan in Amarillo, where Deena, my sorority little sis, met us for lunch.  She brought her family with her and I was enchanted by her daughter who was all things poised and well-mannered and it was only the lack of a single square inch of available space in the Suburban that kept me from throwing her in the back of the car and making off like a bandit with her. 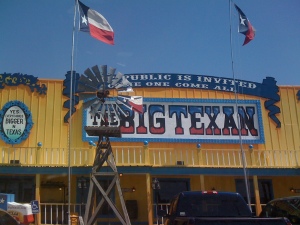 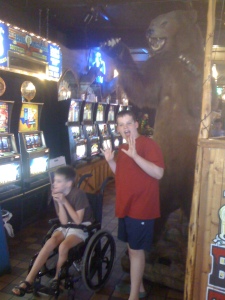 Obligatory "getting eaten by the bear" shot 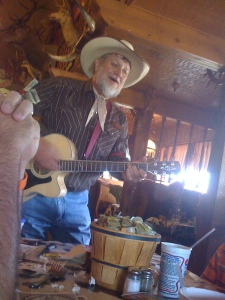 Lunchtime serenade by a cowboy crooner 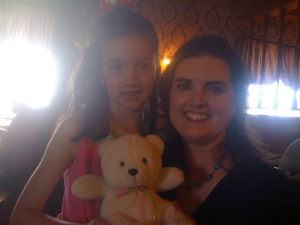 Deena and Jacie. I gave Deena the teddy bear in college and she gave it to J *sniff*

Deena has always been special to me.  The night we sat around discussing Little/Big Sisters,  I claimed her immediately before anyone had a chance to speak for her.  I saw a lot of myself in her.  We were both Texans, tall, brunettes, and a little on the quiet side.  I knew it was a perfect match. 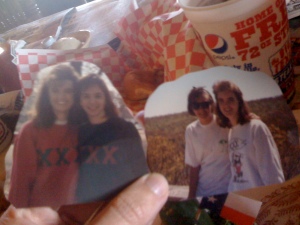 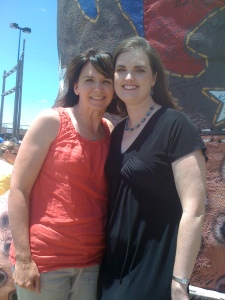 We caught up on the last few years and laughed over old memories and then set out to Cadillac Ranch to make some new ones. 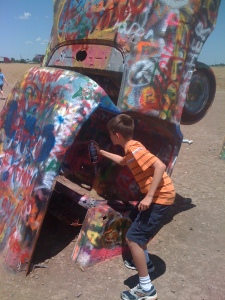 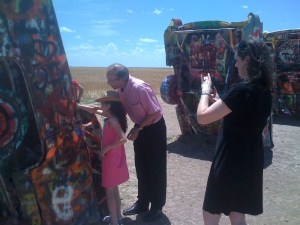 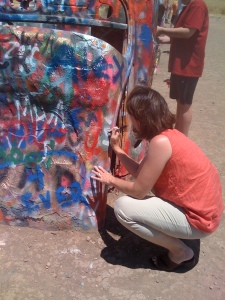 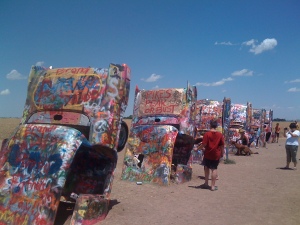 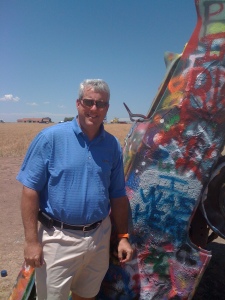 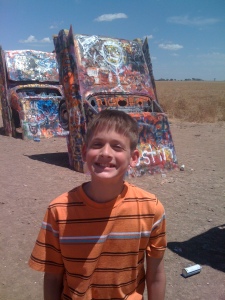 We had a great time LEGALLY spraying graffiti on the cars (JJ made sure that we wouldn’t be hauled in jail before going to town) and Deena confirmed my selection of her as a Little Sis by sending me down the road with homemade chocolate chip cookies that not only were delicious  but also were breakfast the next morning.

My second encounter was not an old friend but a new one.  I met Andrea through the blog and I’ve been oohing and aahing over her ridiculous craft talent and her beautiful daughters.  (I sense a theme going with the daughters thing.)  Andrea lives near Las Vegas and we made arrangements to meet up at a local restaurant.  I left the details up to her and I think we must have a little bit of a reputation she chose the Claim Jumper, a restaurant known for its HUGE portions and my tribe was very happy with her selection.

She brought her family (and I’m going to hope it wasn’t because she thought I was an axe murderer and needed backup) and we fell into easy conversation that lasted for nearly three hours and was marked by repeated visits from the manager who kept asking if we had a nice time and now that I think about it, I think she was trying to get us to leave because it was closing time. Either that or she was tired of hearing my boys chatter because OH MY WORD my children were talking like they hadn’t ever seen another human child and they about talked the girls’ ears off.

We talked about schools (she’s a teacher), the economy (Las Vegas has been extremely hard hit by the housing collapse), life in the desert (it was over 100 degrees the day we arrived and getting hotter), and her craftiness (she has an Etsy shop with adorable things).  Andrea is beyond generous and gracious.  I was humbled by her spirit of giving.  She not only helped the boys celebrate their birthday but she brought me two jars of her delicious homemade jam (mixed berry and peach/apricot) beautifully labeled by her husband Greg and I was completely chagrined that I had not yet finished the knitting project that I started for her AND IS STILL INCOMPLETE.

It did not keep me, however, from accepting her gift and subsequently mowing through a loaf and a half of bread this week eating toast and jam for breakfast. 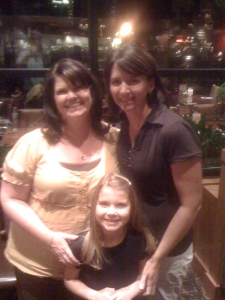 I don’t have a great picture of the two of us.  The lighting was low and, well, iPhone but she has a much better one because she’s a good blogger and posts pretty pictures.  You can see that picture and read her version of our encounter here.

Thanks, Andrea, for a memorable evening with your beautiful family.  It was such a special time together.  We enjoyed every single minute and look forward to catching up with you guys again on our next trip out.

My third encounter was in Colorado Springs with my friend from college and resident Den Mother of Blogging, Meredith.  She had the misfortune of catching us on a day when the kids were, frankly, tired of being hauled in and out of cool!places!to!visit!  and were ready to get home. But I have to hand it to her, she took it all in stride and between flying pizza dough and bouncing children, we managed to edge in a wonderful conversation about family, life in Colorado, dreams and new adventures.  The time spent with her was good for my heart.  She exudes peace and calm (she really is all that and a bag of chips) and the hours spent with her were refreshing, a perfect capstone to my days on the road. 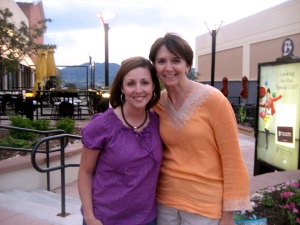 Have a nice day.

This entry was posted in Uncategorized. Bookmark the permalink.